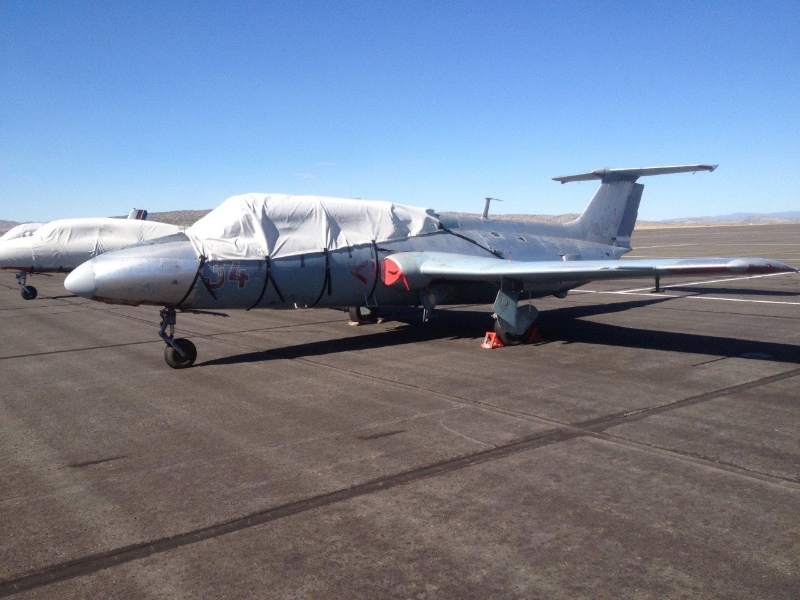 In the early 1960s the USSR was looking for a basic jet trainer. The first production aircraft was delivered in April,1963. In addition to the standard model, two others were produced in small numbers, the L-29R, available with nose cameras and underwing stores, and the L-29A, a single seat aerobatic version.

Altogether, about 3,600 aircraft were completed by the time production at Aero’s Vodochody plant near Prague, ceased in 1974. Approximately 3,000 were delivered to the Soviet Union; other customers included the Czech Air Force, the German Democratic Republic, Romania, Syria, Bulgaria, Hungary, Egypt, Indonesia, Nigeria, Uganda, Iraq.
The wing has the ability to carry two of the following:- 150 lts drop tanks (normal use), 100 kg bombs, pods each containing four 67mm rockets or two pods of 7.62mm machine guns.

The maximum speed with underwing stores is 0.7 mach and 0.75 without, while “G” limits being +8 -4 all this in an aircraft weighing just over 3,500 KGs. The fuselage has a single engine with an air intake in each wing root. The engine is mounted about mid way and towards the rear of the fuselage. The Motorlet M-701c-500 turbojet rated is at 1,960 lbs. thrust. The M-701 is an early generation jet engine and features a single stage centrifugal compressor driven by a single stage axial flow turbine. 100% revs is 15,300 RPM, this gives a whistling sound a bit like the fouger magister of similar vintage. There are 7 combustion chambers mounted in a circular arrangement within the engine.